Took some lousy pictures with my phone... nice shots with my camera to follow.  Just realized I only have 2 weeks left before I'll be gone traveling before adepticon.  Good news, I'm almost done painting the army.  Just finished up assembling and priming the two remaining horse scouts and the 5 objective markers (I love objective markers).

Here's some progress shots of the display base: 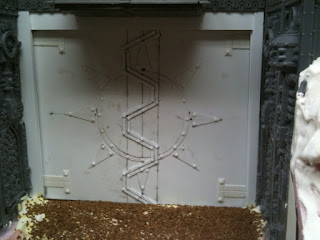 Here are some in progress shots of the display base... the colors aren't finished, and I'll be doing a lot of work on the gold & silver edging.  The river has been my mixing pallet! 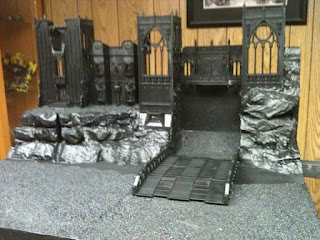 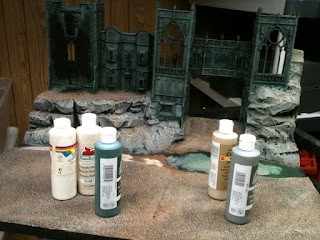 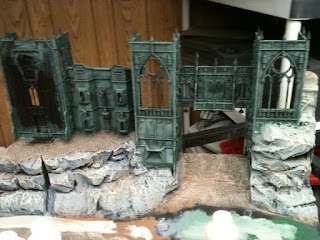 Email ThisBlogThis!Share to TwitterShare to FacebookShare to Pinterest
Labels: Display Base, Imperial Suns

Start of the Display Base!

Wow... only a few weeks left before Adepticon, and I have a lot to do!  Luckily I've been painting along (will attach some pictures ASAP), only really have my terminators and scout horsemen to do left.  My fiance borrowed the camera for the week so I took these two shots from my phone.

If you've seen my rolling display base (equipped with privacy curtain for a beer cart), it has a 30" by 24" topper spot.  I've been collecting the city fight terrain as well as the beautiful Shrine of the Aquilla.  Here's my backdrop sketch of what I'm looking to accomplish.  The idea is that there will be unique stained glass windows, custom front door, and flags that can be switched out depending on if I'm using the base for my Imperial Suns or eventual Space Wolves. 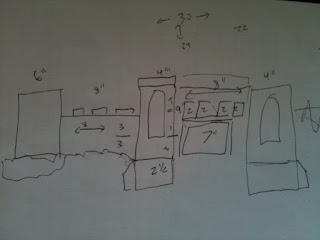 Here's the start of it now.  The left side will be raised on a side of the mountain.  I got some inspiration from the two GW terrain pieces: Space Wolf Terrain and Space Wolf Games Day Display .  The right tower is a work in progress.  Hopefully I'll have some time to work on this during the Winter Olympic opening ceremony. 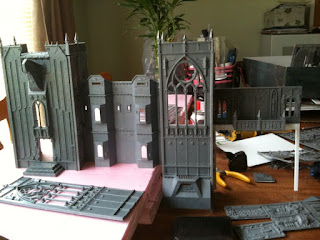 Posted by Brian Carlson at 11:06 AM No comments: