I am a big basing nerd.  Whether it's going to the local craft store to buy dried flowers or taking pictures when I'm on a hike with my wife (so I can recreate the look), I'm always thinking about them.  I think it really helps immerse someone in the miniature, really capture the feel.  Combined with a display board, you can really start to tell a story.  Ok, enough of my basing philosophy.

I thought I'd share some of the basing companies I've used when I want to cut some corners and have them do the work!  I also wanted to link a few of the bases I've seen sprung up that are making me dangerously close to starting a new army. I've linked each of the companies below, so feel free to scope them out for yourself.  I'm all about giving credit where credit is due!

For those of you that have been following my Blood Angels, I've been using Scibor Miniatures for the ruins.  I want to capture a jungle ruins theme.  Combined with a ton of dried flowers and plants (going to tackle that once the army is painted), I think they capture the look and feel I was going for. 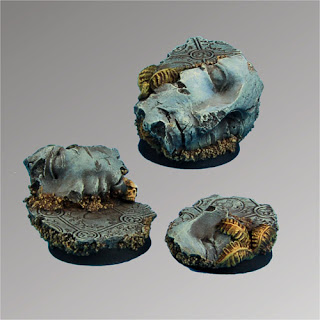 Previously my Black Templar Army went for stone floor look.  I tried to bring out the temple floor and wanted a light color base to contrast the dark colors of the army.  I went with Back 2 Base-IX.  It really beat having to sculpt my own and saved a ton of time. 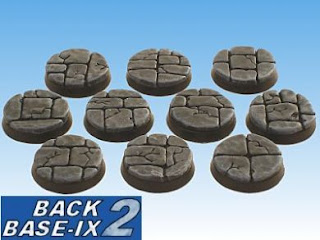 My next big 40k project will more then likely be the Death Korps of Krieg.  Since they're no cheap army to paint, I'm going to invest the time in not only painting them to a high level but basing.  My top three contenders for basing companies for the project are: Micro Art Studio, Secret Weapon Miniatures, and Dragonforge.  Let me know what you think.

Finally it comes a time where basing sometimes is so inspirational that I start an army just due to the basing!  I saw pictures of Micro Art Studio's new Eldar themed base.  It's a real toss-up between their's and Dragonforge.  Here are pictures of both, they look amazing. 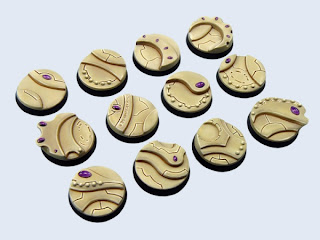 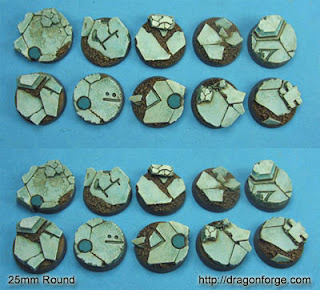 Basing is probably the last thing most people think of when working on a project.  It's usually an afterthought.  I think there are so many options now to a hobbyist to take it to the next level. For a few extra $'s, you can make all the hard work that you've put into painting shine even more.

Email ThisBlogThis!Share to TwitterShare to FacebookShare to Pinterest
Labels: Bases

Blood Angels Progress... on to the Priests

Made some good progress towards my Blood Angels today.  Finished up 6 of the assault marines on foot minus their backpacks (I've magnetized them so I can switch them back and forth) and foliage on the bases.  I'm happy with the way the yellow helmets pop. 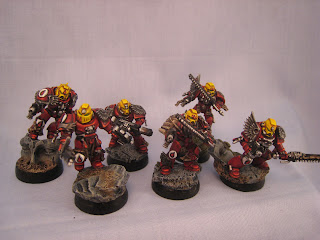 Here's the start of my next batch of marines.  3 Sanguinary Priests (two jump packed versions and one magnetized for walking), along with the remaining 4 assault marines on foot that don't have helmets. 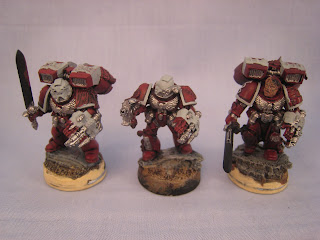 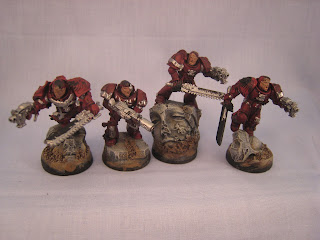 They look all shiny without any wash!  I'm hoping I can make some decent progress tonight.  Once these are done I'll be finished for Adepticon with all the "red" blood angels.

I'll leave you with the 90 done ork boyz.  Sad thing is I'll probably get zero practice games in before the gladiator tournament! 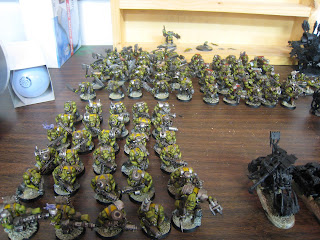 Just finished up my last batch of 30 ork boyz.  That puts me at the 90 I need to have finished for Adepticon.  Now the tons of other miniatures I have to do is another story.  Here's a couple quick shots of the latest mob. 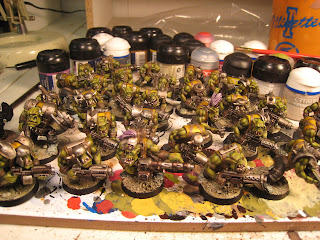 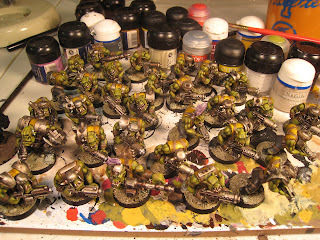 I have primed and ready to go the mekboy stompa.  Going with the bad moons theme I'd like to have a good portion of it yellow.  Either that or primarily black with maybe a large painted yellow moon on the belly.  What are your thoughts? 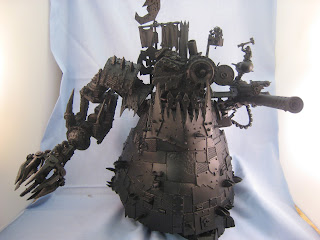 I'll have a full day open tomorrow to get my painting on, time to make some major progress.  I'm debating on whether I keep going on the ork kick or switch gears back to Blood Angels.  Updates tomorrow!

Posted by Brian Carlson at 11:37 PM No comments:

I was tired of constantly forgetting to roll for Red Thirst as well as remembering which unit had it in the game.  Last night I created a bunch of tokens that should help do the trick.  I also did one for the Sanguinator's blessing as well as the Death Mask of Sanguinius.  Real easy to do, just took a bunch of extra 25mm bases and went to town.  I put some 'ard coat over the top to keep them from smearing with handling. 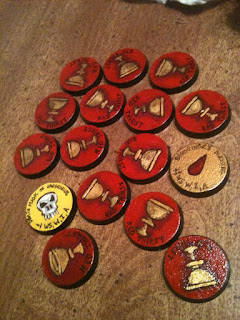 The weekend was fairly productive.  I was able to finish the 15 grotz and 20 boyz that were in progress and started on batch painting my last 30 boyz.  I've been more in the mood to speed paint so the Blood Angels are taking a little rest.

This week's goal is to finish 30 ork boyz and 10 blood angels assault marines.

Posted by Brian Carlson at 8:59 AM No comments:

I needed a break from painting some Blood Angels so there is nothing like speed painting some orks.  Here's the new ork skin method I'm trying out, would love to get your feedback. These orks below haven't been finished completely, but they're tabletop ready. 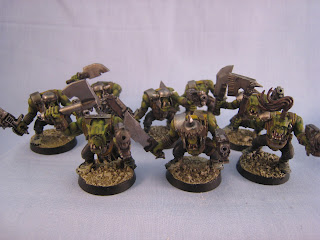 The goal with this skin is to not be neon green or overly green.  I wanted a dirtier / more earthy tone.  The mystery ingredient is gryphonne sepia.  It rocks.

For a fast paint scheme, I'm fairly happy with how it turns out.  It's enough to at least make the skin a decent focal point which allows me to cheat a little on the rest of the model with base colors and washing only.

Tonight I'm getting a game in with the Sanguinary Guard List... will bring the camera for good pictures and a real report.

Posted by Brian Carlson at 10:27 AM No comments:

I had the chance to square off last night in a practice game of my Sanguinary Guard list.  Played against a really well rounded ultramarine list that had a ton of shooting power.  I was extra lucky on my saving throws, which really puts emphasis on the point that every man counts.  For reference, this is what my 1850 list contains:

My opponent castled up with two thunderfire cannons and marine squads and deployed his "bait" of a sternguard squad in the middle of the board along with a land raider with 5 TH/SS Terminators.

I stole the initiative and all but Dante's squad (with sanguinary guard) moved up.  Way too aggressive move on my part since it put me in to a first turn charge with his terminators.  I got lucky and killed off a terminator but they killed all but one man from the sanguinary guard unit... very bad rolling from my opponent.  Turn 2 I proceeded to drop in Dante (who doesn't scatter) who nuked the land raider, and my two other squads converged and killed off the terminators.  The Sanguinator charged the entire sternguard squad solo. 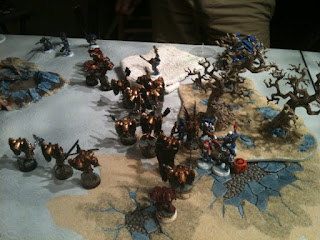 Needless to say it was downhill from here for my opponent as I proceeded to move at all his units.

Thunderfire cannons are nasty.  With the one round that causes the unit to be in difficult terrain... meaning I would take dangerous terrain tests when the unit moved the next turn.  I lost 4 guys in my own turn jumping. That's over 10% of my list since I only have 34 models!!!

Stacking bonus is key: This list is all about synergy between the Sanguinator giving +1 attacks and the two priests giving feel no pain / furious charge.  I need to really be careful about the placement of the priests.  Many times I got a unit just outside of the priest's range.  Every model counts.

Time to make some markers: It's easy to forget who got rage, and which bonuses are distributed.  I think I'm going to make up some counters to help remind me what's going on in the battle.

I'm lucky that I'm getting a second game in this week against another strong opponent.  It may end up being a blood angels vs. blood angels matchup.  I'll bring the real camera this time so I can make a proper battle report.  I'll leave you with my purgatory shot; aka the death pile of marines. 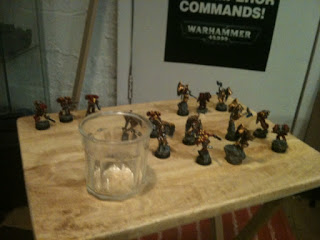 Posted by Brian Carlson at 10:49 AM No comments:

What's Yellow & Green and Washed all over?

That's 30 orks trying to be batched painted at once.  I had a great Saturday playing in the Adepticon Team Tournament Primer, and I need a couple of days to collect my thoughts on which Blood Angels to do before moving forward. 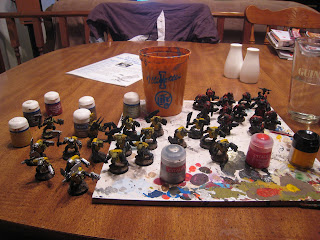 With that said, there is nothing like doing some speed painting of orks.  Here's the batch all together! I'm hobbying outside of the shop so I can spend some time with my wife before she's off traveling for the week.  Later this week I'll pull together a how to on the ork skin, with the mystery wash ingredient!


Posted by Brian Carlson at 9:41 PM No comments:

Email ThisBlogThis!Share to TwitterShare to FacebookShare to Pinterest
Labels: Orks

With Adepticon right around the corner, I snapped a shot of my progress.  Here's all the miniatures I need to finish, unfortunately most are not done!  I did finally get everything assembled and based, so now it's speed painting time... and time to rack up some points with the wife so I can get extra painting in. 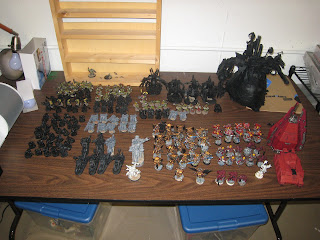 I've also started weighting the bases of my Blood Angels.  I do this for three reasons:

1. Many of the miniatures are top heavy it keeps them from falling over.
2. I've inserted a rare earth magnet inside the washer and combined with the metal washer adheres to my cut magnet base in my carrying case allowing me to pack the miniatures in tight!
3. I just like the feel of a heavier miniature :)

As you can see I end up placing two washers on top of each other and gluing them to the base.  I then used some wood putty to round out the outside of the base and sand it down.  Hopefully it looks disguised (all my Blood Angels to date have been using this method. 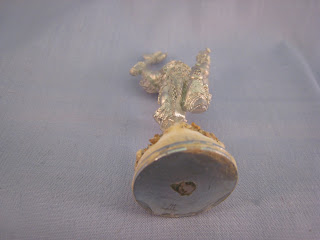 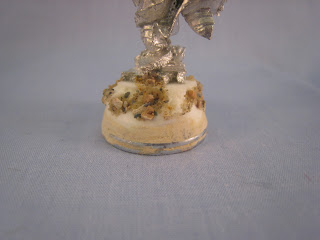 I've also decided that for my 10 assault marines on foot and for my Chaplain I magnatized the backpacks.  That way I can switch over to jump packs with relative ease.  Now it remains to be seen if I'm able to not lose the backpacks mid-game! 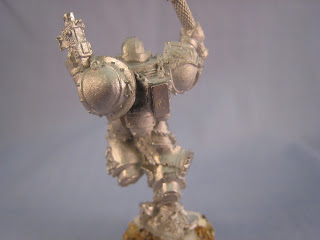 Tomorrow is the Adepticon team tournament primer where we'll help test out missions and get some practice games in.  Two of my teammates are driving up from Memphis.  Looking forward to it!  My big test will be to see if I actually like using the Baal Predator with the flamestorm cannon.

Now that I've finally settled in to the new place, I have my photo booth up and running.  Adepticon is fast approaching and it's time to kick up the updates along with getting painting done!  Here's some progress I've made on my assault marines and sanguinary guard.  I haven't added any folieage or grass to the bases yet, I like to do that in bigger batches. 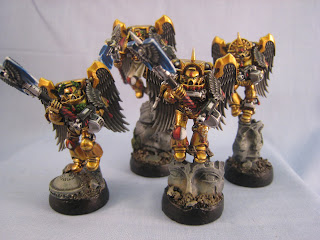 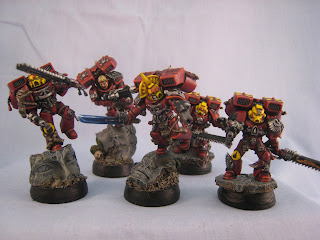 I've also experimented with a new way of doing blond hair.  What do you think of this method?  I start with Tausept Ocre, then line in some bleached bone, then a little bit of lining in white. The example is on the far right. 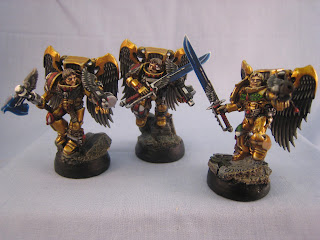 Tonight will be another update, as I'm going to take a good look of my total project and what I have to do!