I had some fun painting up my first Wild West Exodus model.  I figured I would take it easy and start with a line trooper to figure out the color scheme and progression.

After a few takes, I ended up lightning up both the jacket and pants as well as changed the leather strapping from black to brown.  It looked cool dark, but ultimately the details got lost.  Hope you enjoy! 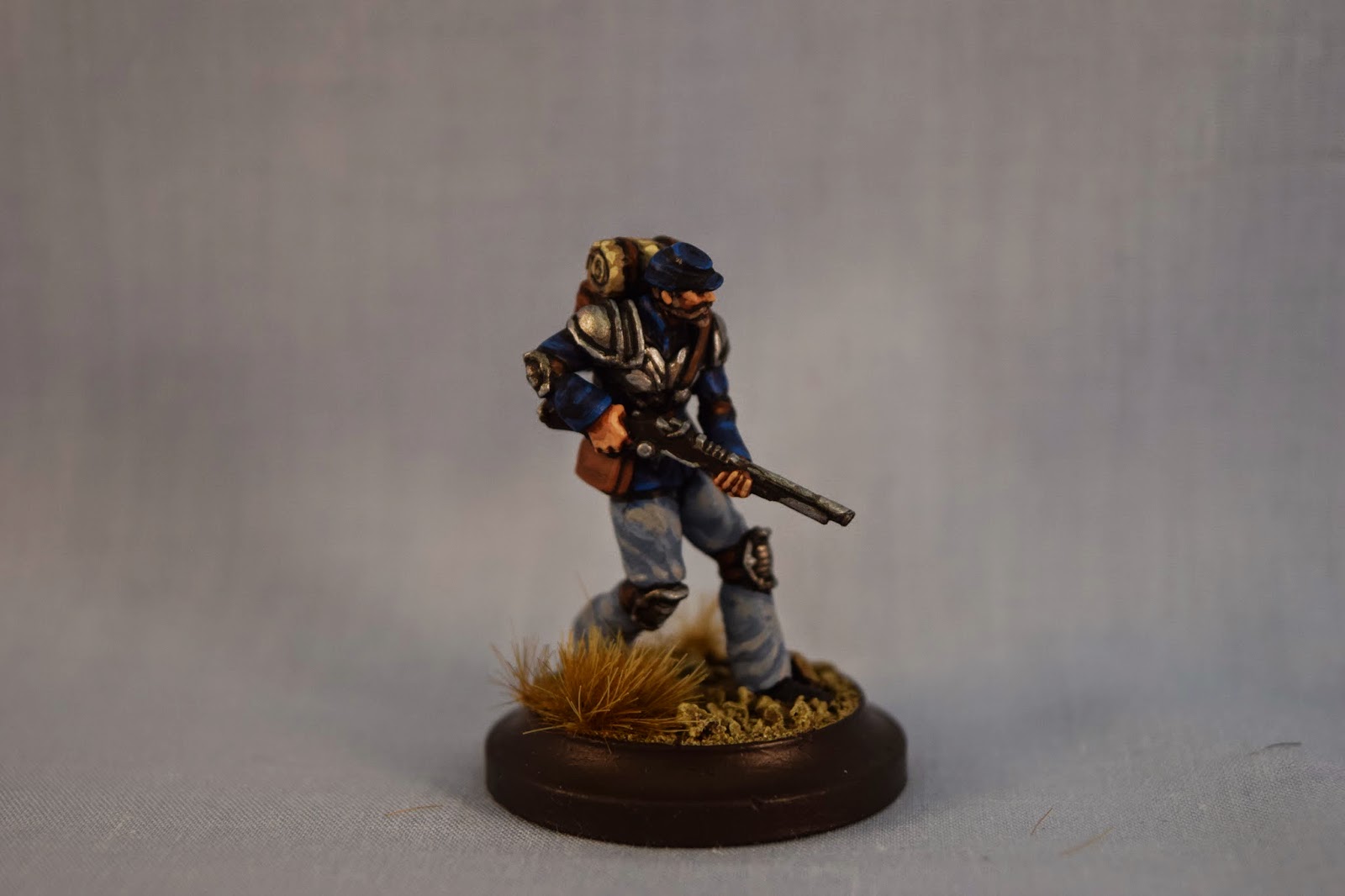 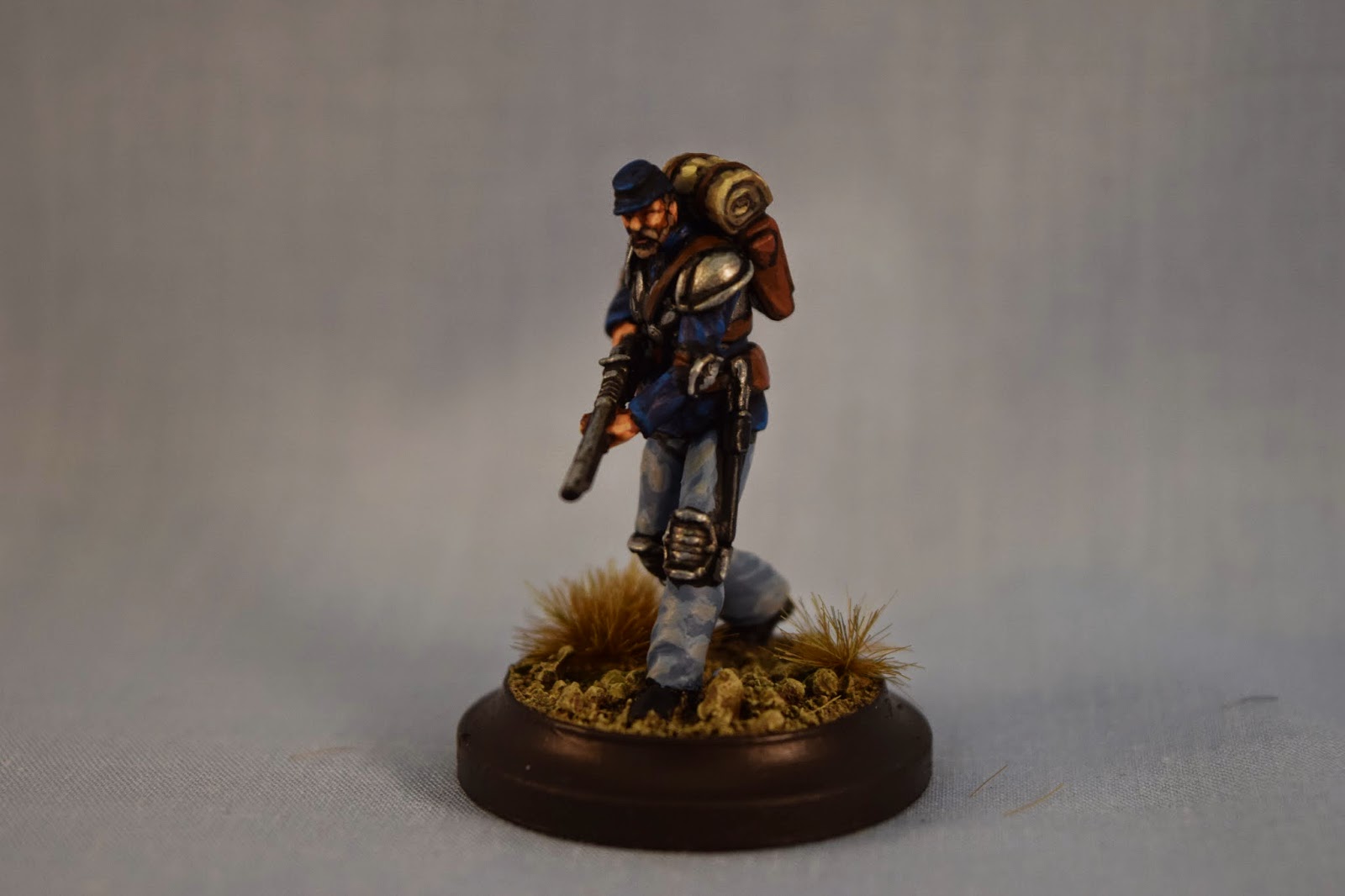 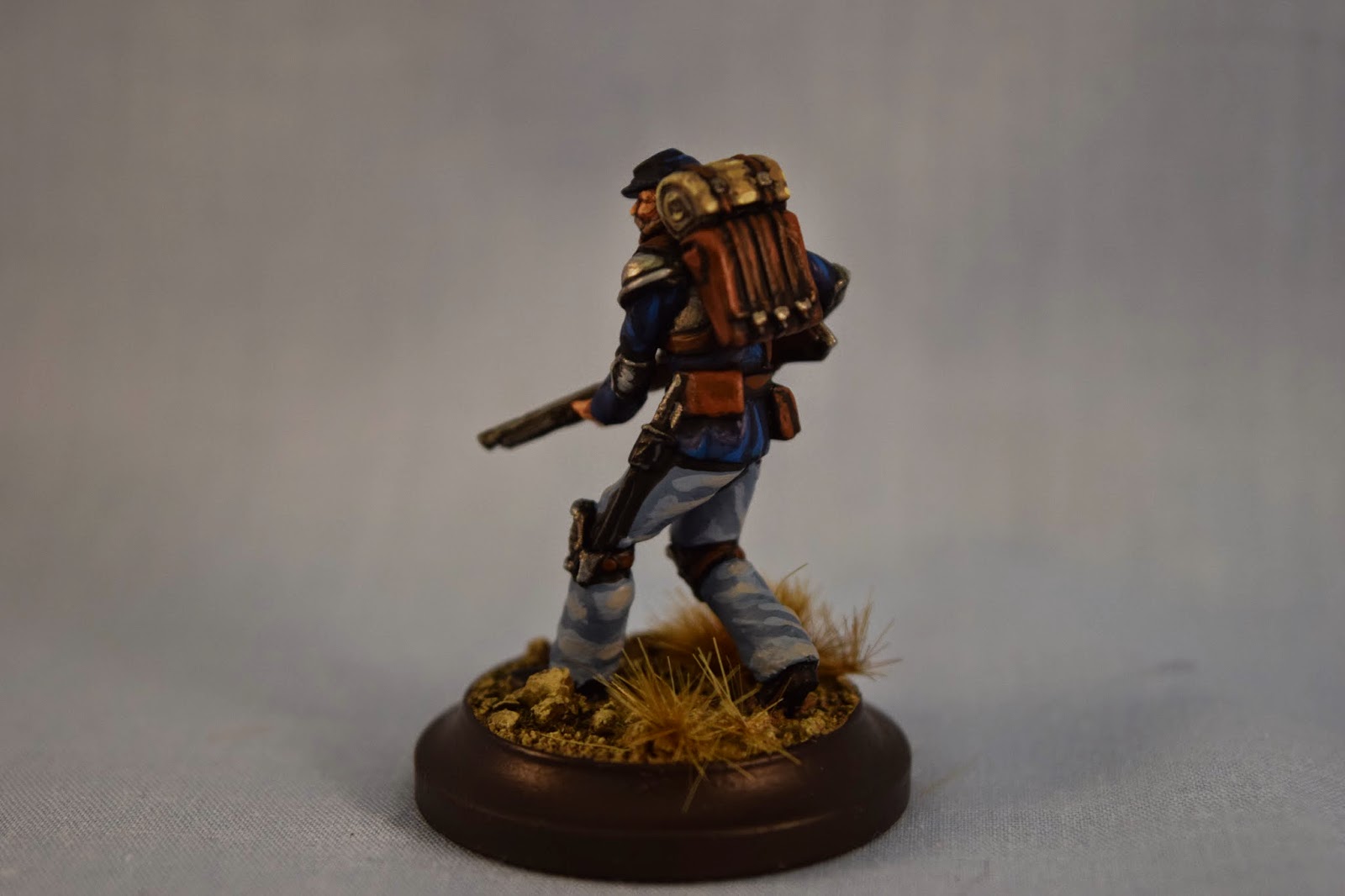 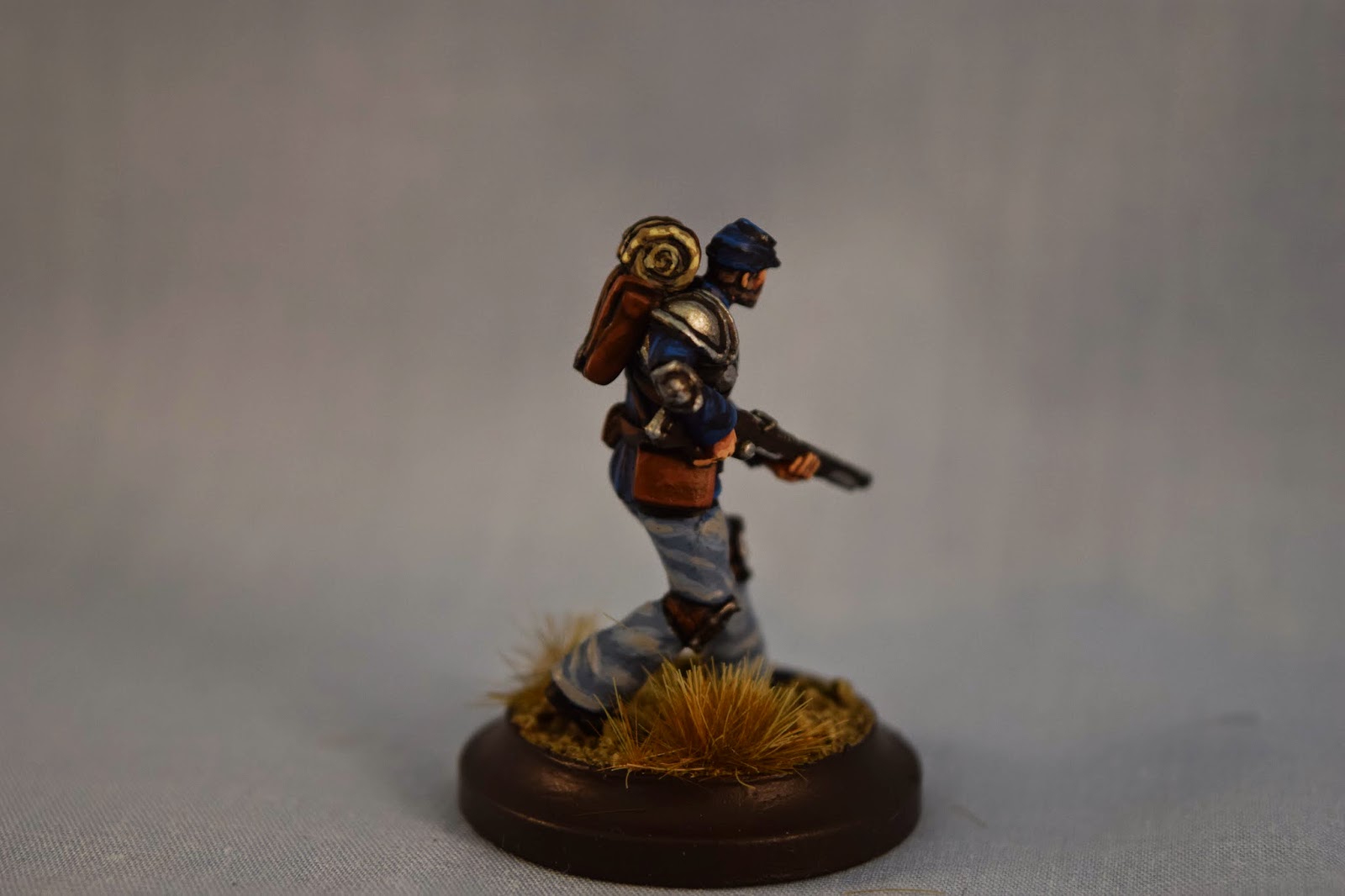 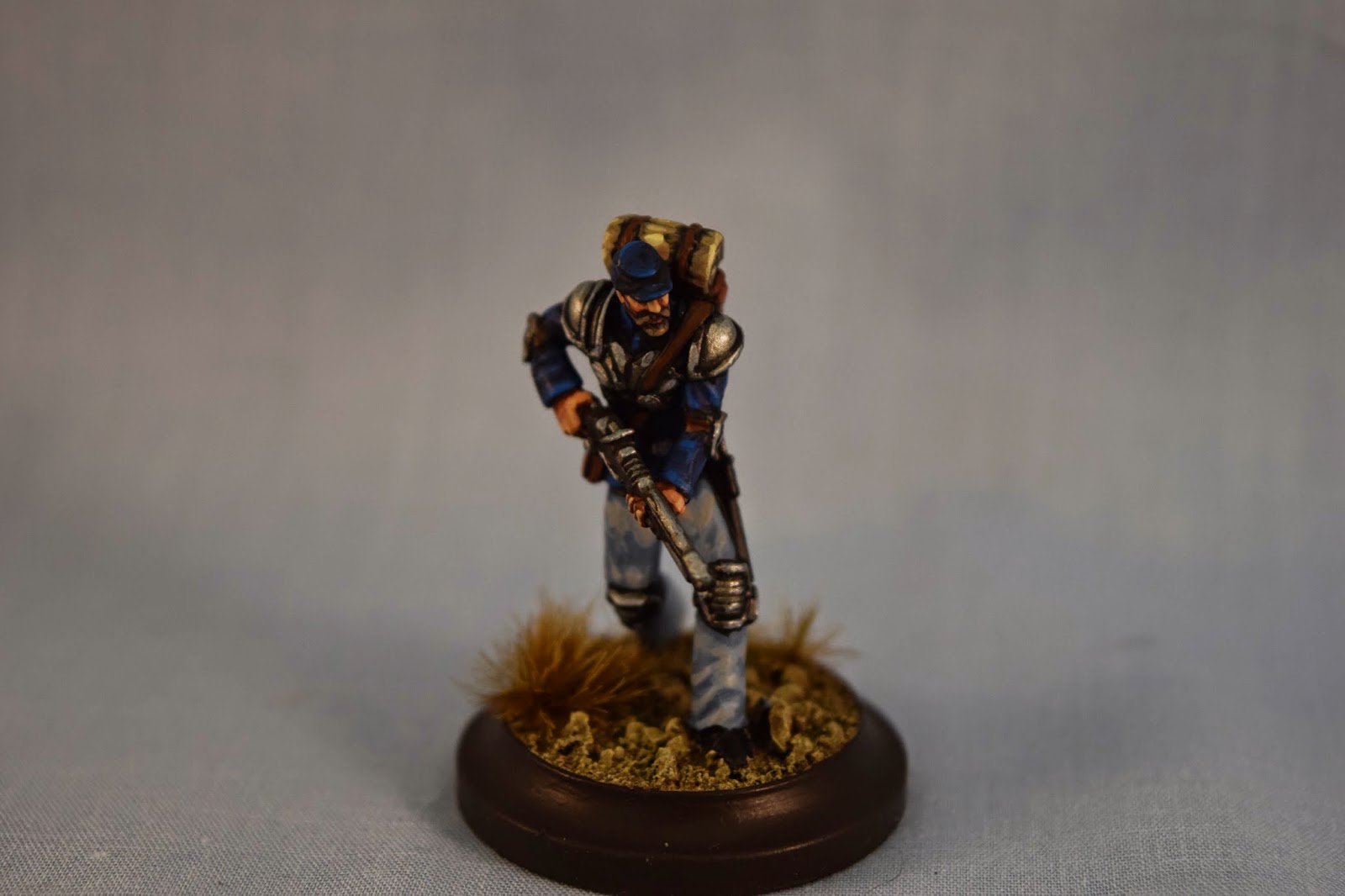 It was a nice change of pace from painting tons of 40k.  I'm really looking forward to getting my first faction done so I can try out the game.  I've been reading through the rulebook and all the background story.
Posted by Brian Carlson at 1:24 PM No comments:

Well, we're already 1/4 the way done for the year, but my hobby calendar pretty much runs on Adpeticon to the next Adepticon.  With the baby here, and an overall shrinking of the hobby stores to play at, my priorities will be shifting this year.  We'll see how that plays out!

I'm pretty into to-do lists at work, so forgive the numbers and bullets!  I'm actually going to print this out and stick this in my hobby area.  Here it goes in no particular order! 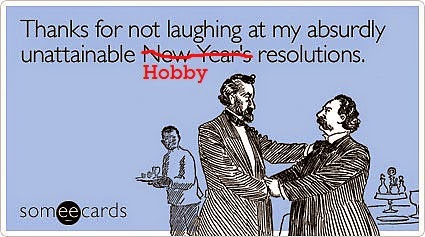 1.  Terrain:  I am hell bent on getting some major amounts of terrain done.

-  I have about 10 Zuzzy matts as well as a ton of the urban, ruins, and rolling fields Secret Weapon Miniatures.  I also have 6 feet worth of GW urban boards  and 2 feet worth of Forgeworld urban to paint.

- Put together enough urban terrain as well as ruined temple terrain for two to three 4x6' tables.  Goal will be to have 4 tables so I can have a mini 8 person 40k gaming day

2.  Re-arrange Hobby Area: It has been put off for a long, long time.

Funny enough, when I hobby I tend to bring my supplies up to the kitchen so I can hang with my wife while she is in the next room watching TV.  I have an awesome shop and attached area with gaming tables that needs to be organized and used!  Plus once the little one is able to grab at things, I'm going to want to keep things out of sight/reach in the basement.

Too many cool new stuff comes out.  I need to basically come to the conclusion if I haven't touched or started a project in 5+ years or an army I'm not happy with the paintjob collecting dust, it needs to go.

I can recycle the cash back into my current projects plus it will free up space.  I think part of the hobby collects collectors, so it's hard to get rid of bits and boxes.

We've done pretty well every year, but I'm always under a lot of stress towards the end.  Plus we never get any playtesting in.  It's a minor miracle we placed in the top 20% on all categories.  This year I'd like to space out the project through the course of the year.

We're going to try and start brainstorming our theme a little earlier so we can go bigger and better!

5.  Focus on one 40k Army - Imperial Guard: This may be the toughest one

I probably knock out 2 to 3 big 40k projects a year.  This year I'd like to try to do a smaller force for the team tournament but mostly focus on my Imperial Guard.  I have so many cool models that need paint and I'm really going to try and focus and not get distracted by the cool new stuff coming out... cough... Adeptus Mechanicus... cough...

I've taken the plunge at Adepticon and picked up the Union and Holy Order of Man.  I also backed the kickstarter and will be grabbing Confederates and Golden Army.  Ultimately I'm really looking forward to a laid back change of pace game and focus on painting a few models rather then going crazy with a full force.  Plus it would be fun to help support a new game

The models are awesome, and I love the backstory, terrain, etc.  We have some active guys in the Chicago area and I really want to foster the community and make kick-ass thematic tables.  I'll probably start with Ariadna and branch out from there.  It'll be a total change of pace trying to go with that small scale and really focus on painting individual miniatures.

The big challenge (besides the small detailed scale) is that I need to learn a fairly complex rules and get some regular games in before I jump into tournaments.  The main reason I like tournaments is that I can get some guaranteed competitive painted games in in a set amount of time.  Plus they are "events" so I can block the time.  To get to that level though, I need to be at least somewhat competent in the rules

I have the space, and now that I'm not traveling as much it would be nice to get a regular group of guys that can hang at my place and get some games in.  I've run into the issue that a bunch of my friends that I normally game with are an hour away, so it's a bit tough.  So time to make more friends and get a regular beer & bbq league going.

9.  Participate in a Campaign / Thematic Events: I preach this all the time and never do it

I think I have an addiction to list building and maxing potential of lists.  It's what my mind does and spins constantly when I'm doing other things.  I also constantly think about paint schemes and army planning.  When it comes down to it though, there is nothing like a campaign or thematic games that aren't about a one-off tournament setting.  I'd like to do some more of that in my limited free time!

10.  Plan the Adepticon 40k Friendly: Bigger and better for year 14 of Adepticon, 5th of the Friendly

Our planning group that prepares and runs the 40k Friendly has a blast.  Honestly it's probably some of the most fun I've had.  We're really looking forward to making it bigger and better for next year.  It looks like we'll get some more slots open for next year so we'll be doubling-down!

So there you have it... I'll print this sucker off and see how I wrap up next April with what was accomplished this hobby season!
Posted by Brian Carlson at 3:15 PM 5 comments: