I'm still plodding away at adding to my Tau/Eldar 40k force (will probably be my Adepticon 2014 force), but I've really been lured in to doing terrain for other systems.  Since a group of us are getting into infinity, I'm looking at making a quick and dirty urban table.  I think I'll go with a similar concept to what CNC Workshop is doing with their City Tiles 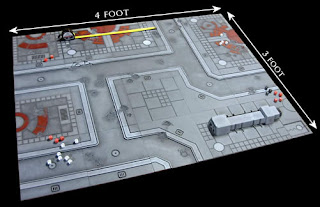 I figure I could make 1 foot square tiles and do cool stuff to go on all of them.  That way I can have some good looking and fast streets as well.  I'd order from CNC Workshop but the freight and cost is just a little too pricey. 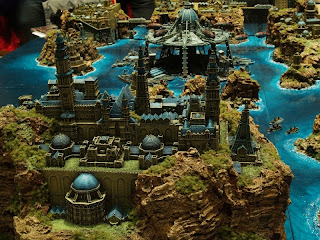 Detailed pictures can be seen at the blog: Hamburger Tactica

Now to figure out how to scratch build some apartment complexes and roads!

NOVA and a Hobby Change of Direction

Just got back from NOVA.  Almost had everything completely painted.  I made my biggest mistake that I said I wouldn't.  Just didn't get that many practice games beforehand.  Which meant I didn't really know what my army could and could not do. 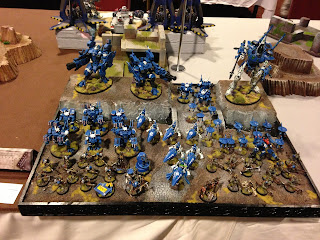 With that said, I did fairly well.  I went 3-1 on the first half and was put in bracket 3.  I then choked in my bracket and went 2-2.  The first loss was due to a tiebrekaer and the second loss was a little suspect.  I won't bitch on that, but there was some less then fair things that went down on that.

I guess I've reached a point where I need a little change of pace.  I have a blast playing 40k and really enjoy competitive games.  I just need to stop painting armies like it's going out of style.  My wife will agree with that completely.  Some of the 40k big tournament scene has gotten a bit out of hand with the whole Torrent of Fire throwing around phrases like "expert advice" and making the scene some big ego driven top tier crap it's just sucking the fun out of things.

To completely contrast I went over to the Infinity room.  Here is where I felt 40k was 15 years ago.  A growing competitive scene, people generally enthusiastic about sharing the hobby and getting others engaged, very inclusive.  Part of what I miss is really sinking my teeth into a miniature and painting like every model is a hero.  When I was a kid on a very limited budget that's what I did.  I'd like to get back into that spirit.

In addition to that I really want some eye candy terrain.  Really immerse myself in the action, make it a true joy to play on.  With Infinity relying on tons of terrain, I want to create that display board effect that I try when I do my more time intensive display boards.  To capture that feeling of what the army/story/game is all about.

I've picked up some Ariadna models, I absolutely love the Frenchies.  I had to catch myself from thinking right away on my next force, how to expand, all that crap. I'm just going to sit down and really spend some time painting them to a high level, play a ton of games, and make some seriously kick-ass terrain.  Once that's done, I'll look at another force - preferably more anime/outrageous (like Nomads or Yu Jing or Pan Oceana).

With the GW Chicago Battle Bunker rumored to close soon, I'm losing my major 40k hang out.  This will give me a chance to try the whole infinity hobby out, and work on my gaming basement to get some 40k tables going so I can start hosting mini events / bbq gaming drink fests at my house.

There's my rant.  Looking forward to a bit of hobby changing direction!
Posted by Brian Carlson at 11:11 AM 4 comments: