It's that time of year for holiday sales.  I wanted to give everyone a heads up on a couple of places I've taken advantage of visiting.  As you can see by my latest imperial project, I've been basing my new miniatures with Dragonforge.  They're doing a buy 3 get 1 free.  It's a heck of a good deal and they honestly put some of the best bases out there.  They wrap up the sale at midnight on the 25th.

I picked up some more of the Sanctuary themed bases.  Now it's time to get priming models before it gets too ridiculously cold outisde!

The other site is Battlefoam.  I have 3 shelves in my basement entirely stacked with their stuff.  They're running a 25% off sale, which is also pretty amazing.  I grabbed some flyer transports for vendettas and storm ravens... yes I'll be painting those up in the near future.

I just got over a nasty flu which put me out of commission for a few days.  It sucks when you have all this "free" time and all you can do is stare at the TV.  It also meant I missed out on a tasty Thanksgiving dinner.  Ah well, at least it meant that I didn't gain the holiday pounds!

Stay tuned for some infantry updates for the Knights Angelus!
Posted by Brian Carlson at 11:48 AM No comments:

I finished the first two of my four dreads I'll be using in my Blood Angels / GK list.  The furiouso I had already modeled for another army, so the legs were positioned for a certain base. I had to pull it off that base and transpose it on one of my ruins bases.

The "toes" of the dread are a little unnatural on the pillar but I still think it does the job.  Nothing like 3 flame templates on an armor 13 platform to drop in and mince some infantry!  I think I'll add some static grass in the "dirt" area of the rubble to break up the basing. 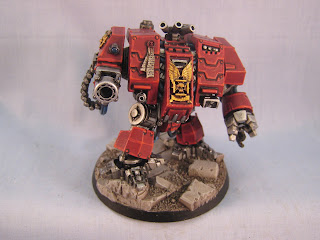 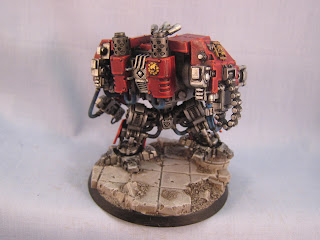 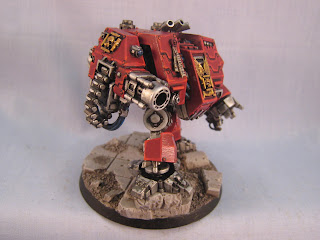 My second dread was one of three riflemen.  I decided for both this one and the other that I had to do some other color to break up the model.  I tried going with blue cabling to mix things up a bit.  Blue is the accent color I use for power weapons, lenses, etc. so I figured it would work on this model too. 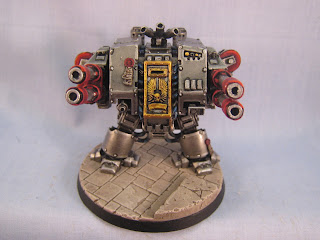 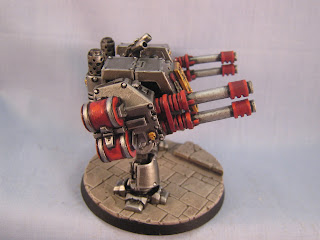 Another thing to break up the basing on this miniature is to add some dead leaves.  It shouldn't dominate the stone basing but it will help break things up.

I'm almost finished up with my 10 robed marines that will be used as death company / sternguard / vets!  I should have them finished Friday night.

My plan is Saturday and Sunday to get a lot of gaming in.  I'm debating for Adepticon whether to go with my Necrons or the drop pod blood angels / GK henchmen list. Decisions, decisions...
Posted by Brian Carlson at 8:00 AM 2 comments:

I'm making some major progress on the Knights Angelus.  I finished up three models to add to the tactical squad, a meltagun, multi-melta and the sgt. from the dark vengeance box.  I swapped his chainsword for a power axe and plasma pistol for a bolt pistol. 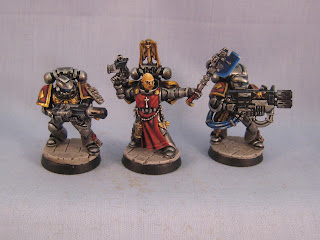 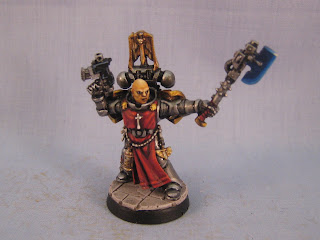 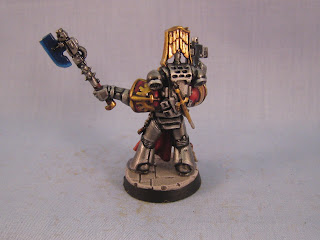 I also finished up three razorbacks.  I traded my pirate ships and pirates from last year's adepticon fantasy team tournament for a few painted razorbacks, cadians and terrain.  A little primer a repaint and they are finished! 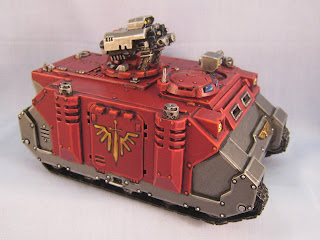 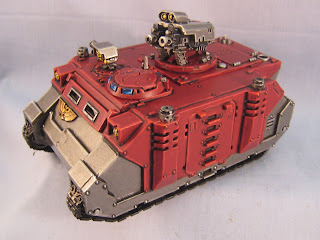 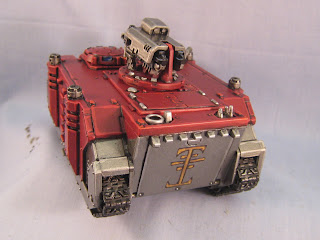 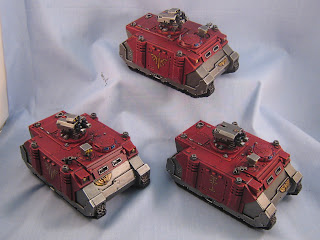 It's amazing how a semi-gloss really transforms the red.  I would rather cheat and use the forgeworld doors, but I didn't want to hack up the models, so I did some not-so-professional freehand of dark angels and inquisition symbols.

Working on the 4 dreads now!
Posted by Brian Carlson at 5:46 PM No comments: