I'm back!  I haven't disappeared from the blogosphere but have been lurking reading on all of the boards.  For the hobby side, I've been busy adding to my Necrons, but it really is uninspired painting, just getting extra units ready for the tournament scene.  Speaking of that, I've finally settled down on a list that seems to do well.  A little light on troops, but it packs a punch.

As for painting, it's now crunch time to get everything ready for Adepticon.  Lucky for me the only thing I need to paint up is my 1k points of Knights Angelus for the team tournament.  My necrons are done for the singles, and I'll be running the 40k Friendly.

On to my most hated miniature to paint, the drop pod.  It's so incredibly boring to paint. Tons of surface area so lots of coats of paint, line highlighting and black lining.  I suppose I could add some creative elements to it, but it sucks the creative life out of me.  Here's my first one done.  I'll probably end up painting 5 (gotta do odd #'s), but I only have to do 2 for Adepticon. 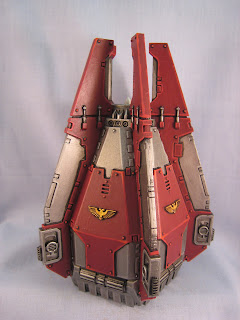 The model definitely needs some exhaust / burn / weathering done to it.  After all, it has dropped from space.  But this will do for now.

Here's what I have to get done for Adepticon:

If it stops raining here in Chicago, I'll actually get to go outside and prime some miniatures.  Until then, I'll just work on the next boring pod!
Posted by Brian Carlson at 10:11 AM 9 comments: