The riptide is finished!  Wow that was a big model.  I kept the black highlighting simple, probably could have used an extra highlight but I honestly hate painting black.  If you've seen my kroot mercs list I put a little extra flowers and plants on the base.  Nothing too over the top, just a little decorations. 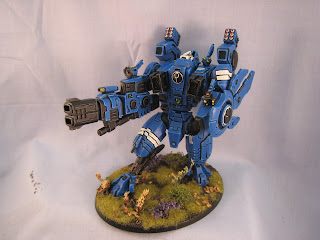 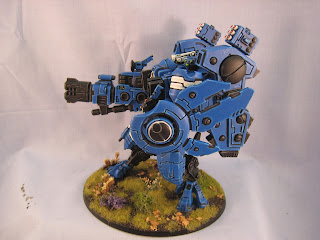 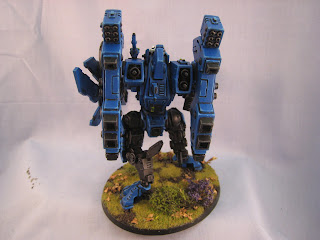 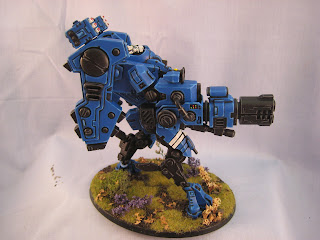 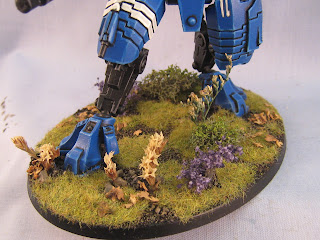 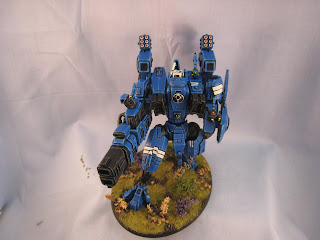 Working on the three broadsides now.  At least I did the biggest model first, these broadsides will be nothing compared to that.  By the time I get to my 1 crisis suit I have to do, I'll feel like I'm painting a single marine.

Off traveling for the next week so I won't get a whole lot of painting in. I might bring my brushes with me, not decided yet.  Nova is only a little over a month away, gotta get cracking!
Posted by Brian Carlson at 1:35 PM 2 comments:

Email ThisBlogThis!Share to TwitterShare to FacebookShare to Pinterest
Labels: Tau

I'm around... with Hot Tau Action!

Wow, I really have been distracted with "real life" lately, but still finding a bit of time here and there for the painting hobby.  I decided about three months ago I was going to get serious about working out, watching my diet, and getting back to fencing.  Good news is it has been successful, and I've dropped about 25 pounds and getting my endurance better then what it was 20 years ago!

Bad news, is my hobby has been a little on the light side.  I did decide I'd dust off the Tau and give them a try.  I've been having a lot of fun testing different army builds and am working on a Riptide and some of the new broadsides. Pictures will be up this week as I finish the riptide up.

For kicks, I pulled out all my painted infantry.  Holy crap, I have a lot.  Back in the day I had a fully painted kroot mercs list.  This isn't including all the vehicles and suits that are painted. 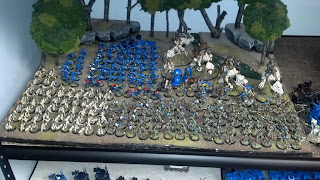 Not sure what I'll do with all those hounds, since I have only been using one per kroot squad to give them acute senses.

I've found a farseer is a must as an ally for tau, especially if you don't want to load up with marker lights.  His ability to do fortune and prescience allows for the twin linking madness that tau's BS3 really needs.  Plus two jetbike squads are a big help.

I'm going to try and roll with this list for NOVA.  Still tweaking the specifics, but I'm fairly happy with how it works together.

The Ethereal is a must giving the leadership 10 bubble as well as dishing out the bonuses.  Nothing like twin-linking with fortune 33 shots from a firewarrior squad, or 60 shots from a kroot squad.  Nasty stuff for not a ton of points.  I've found the SMS coming in handy too to root out the annoying minimum size squads like henchmen that hide.

Here's what I'll need to paint to make this list finished for nova.