2016 has come to a close and I'm already tearing through 2017.  It was an interesting year, and I didn't tackle as many of the projects I was hoping to as I was busy in other hobbies (sword fighting), and balanced the work and family life. I also put some major time into renovation of my house but at least now I have an awesome screen room ready for the spring when the weather gets nice.

It started out as our team tournament army for adepticon.  I then added a bunch of big monsters for the hellforged hunting pack. I owe some nice shots of the army up on the blog, that something I'll do over the next few weeks. 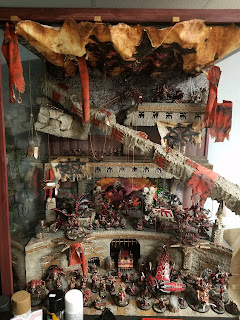 2.  Odds and Ends for Necrons

I added 20 or so necron models to my force; a bunch of lychguard, stalkers, and characters.  I just feel dirty every time I play necrons!

3.  Tablescapes Tiles and Learned to Airbrush

I finally got over my fear of the airbrush and started working with terrain, especially the tablescapes tiles.  I also played around with how to use oil washes.  I haven't gotten as far as using them on miniatures, but for terrain it was a great way to add some shading.  In the end, I finished about 80 to 90% of the work.  I just need to add some finishing touches and learn how to weather. 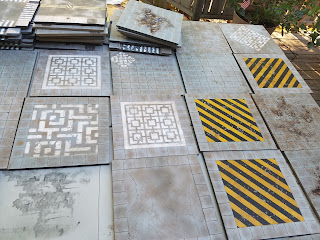 This army seems to be taking forever to paint, and it doesn't help that it has a ton of models.  I'll be playing this for the Adepticon team tournament in 2017 as well as it'll be my go-to army for awhile.  I'll need to bust out some terrain for it as well.

I'd like to have a force for 30k, and the banana marines will be my army.  Should be fun to paint up a clean "standard" force.

I keep saying I want to get into infinity.  I'm going to try and put a damper on all the crazy 40k armies that keep coming out that will distract me and try and put some time into this game.

I really started tackling this at the end of the year and made a ton of progress. I'd like to sell a bunch of the stuff that is collecting dust and taking up space and organize the rest.

I'm fortunate enough that my father is an excellent craftsman and can help me design a functional and beautiful gaming table.  I've always wanted one and I think now is the time.

6.  Terrain - and hosting some Beer/Gaming at my place

This really goes hand in hand with #6, to have some beautiful terrain not only for Infinity but 40k.  I'd like to have at least 2 or 3 themed tables for infinity and at least 3 to 4 tables worth of 40k terrain.  That way I can host some gaming days at my place.

In addition to learning how to improve the airbrush, I've also been afraid of working with weathering powders.  This needs to get tackled this year.

I'd like to at least start an age of sigmar army for some relaxed play.  Either I'll use some of the Khorne models I've already created to flush that out, or I'll try some models I already have (Bretonnian or Chaos).  If I really get aggressive, I've always wanted to do a night goblin army with tons of squigs.

So there we have it!  If I could actually knock out half of my resolutions for 2017 I think it will be a pretty successful hobby year.

Posted by Brian Carlson at 11:27 AM No comments: