Wow, it has been a long time since I've made an update to the blog.  Work has been crazy as usual, but I am making a bit of progress towards painting.  I've added some to my Necrons, but more importantly have settled in on a new paint scheme.

With the allies system in 6th edition, I want one paint scheme that can tie together a good chunk of imperial armies.  Namely: Guard, Space Marines (many flavors), and Grey Knights.

I love the look of silver and red with gold trim.  It's a regal look and with my light colored bases from Dragonforge I think it will be a beautiful contrast.  Plus this will go along with my Black Templar.  I absolutely love the new Dark Vengeance models, and the standard tactical marines have inspired me.  I will be using them as my marine base with rules for either standard marines, dark angels or blood angels.  Here's my first set of miniatures. 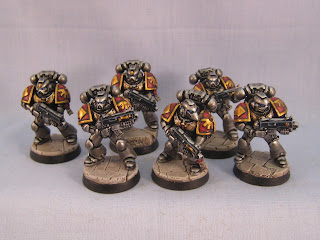 With the new citadel paints, I want to make sure I limit the colors to the new ones out to keep me from running out on old colors.  I'm currently finishing up three razorbacks.  I got them from a trade from a friend, so I cleaned them up a bit and re-primed.  I'll have them finished tonight.

Here is the 1,850 list that I'm debating for Adepticon.  It will be either this list or my Necrons.

In this list, I'm debating switching points to get a quad gun in as well as switching one of the power axes in my death company with a power fist.  Also the other swap is whether I take the stormraven or switch it out with a blood angels vindicator and a 5th razorback.

The idea is that I put two drop pods in my opponents face immediately.  They act as a distraction while I pew-pew with my more fragile shooting and scoring MSU.
Posted by Brian Carlson at 8:28 PM No comments: