I have now gotten 5 games of 6th edition in and I'm having a pretty good time.  The flyer wing of my necrons is taking me a little to get used to it, but it has been enjoyable.  I've found that allies really compliment a force and make it stronger.  For instance, for my necrons I've allied in orks with two squads of slugga boyz and a big mek. It's the stable troop choice (and bodies) I needed

I did figure since I'm such a hobby addict I'd design a force from the ground up that took advantage of all the new facets of 6th edition and paint it as one.

- Allies: Marines & Guard
- Flyers: Going to start with a Stormtalon
- Fortifications: I'll start with an Aegis Defense Line, although I really like the idea of doing a bastion)

The necron paint scheme has been well received and I think it would be cool to bring that across Imperial Guard, Space Marines (any flavor) and Chaos Space Marines.

Here's my attempt of taking the same theme from the necron color scheme and pulling it over.  The heads are from Pig Iron.  I loved the visor, it gives it a creepy inducted guard look. 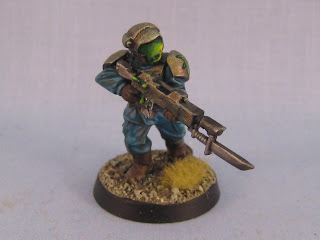 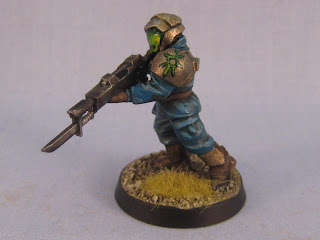 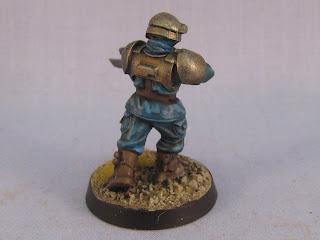 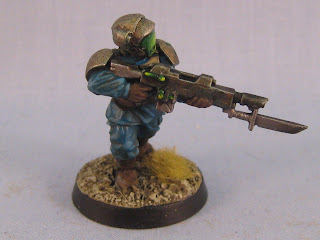 My new theme will be the "Cult of the Machine".  My back-story is a forge world that has a cult worship of the woken necrons.  I'll be using chaos marines as the core of my marine force but keeping away from too many chaos stars or chaos icons.  Instead I'll use as many skulls as possible.

This week I'll try to work on a test model for the marines.

Necrons are going very well though, I'm still going to use them for NOVA.  I think I've settled in on a list that works for me.  Now it's just time to keep play testing it.