I've been in a bit of a painting funk and having a real hard time getting inspired to paint.  So to keep the hobby push going, I started working on a Baron conversion.  Here's the structure that I've started with.  The wings will need some green stuff to blend the two blades together.  I did a bit of a rush job, but I think it gets the  point across.  I'll be sure to put up final shots of the finished product.  The cloak/head was a high elf mage. 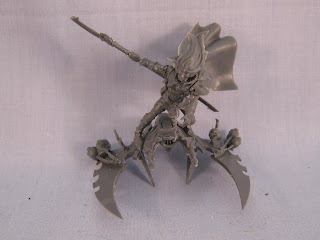 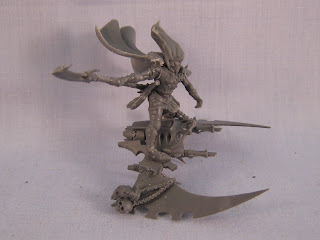 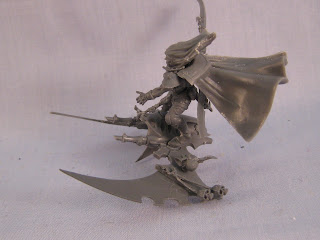 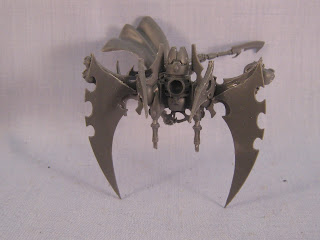 If  I can get motivated, I'll start back up on the crew for the venoms/ravagers as well as the Necron vehicles I was working on.
Posted by Brian Carlson at 12:46 PM No comments:

Wow, the Necron vehicles are a bit of work to clean and assemble.  Maybe because I'm used to doing marine boxes, I've gotten off easy on assembly.  At least the painting should be fairly quick.  I put together an Annihilation Barge as well as the Ghost Ark.  I took the instructions advice and left off the "fenders" and necron warriors to paint separately.  I'll let you know if that ended up being a good idea or not.  It will mean I'll have to use super glue instead of plastic cement, but they aren't high stress joints so it shouldn't be an issue. 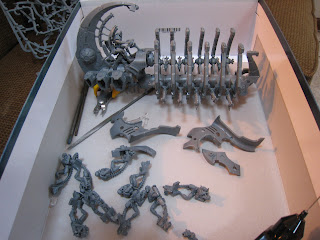 I also have assembled some Dark Eldar Scourges and Hellions.  Since it's fairly warm (basically not freezing cold) and sunny, I'll be able to get some priming in this afternoon.  This holiday weekend my goal is to paint:

I'd also like to finish assembling my Black Templar.  Too many projects to juggle at once!
Posted by Brian Carlson at 12:42 PM 4 comments:

Email ThisBlogThis!Share to TwitterShare to FacebookShare to Pinterest
Labels: Necron

My rotation of 40k painting continues between Dark Eldar, Black Templar & Necrons.  I wanted to finish up the necrons I started on before I jump back to Dark Eldar.  With the immortals I knew I had to break up some of the metal with a color, otherwise it'd just get way too washed out.  I went with the whole Tomb Kings lock and brought in Hawk Turquoise.  To tone it down, after it was highlighted I put a wash of Gryphonne Sepia. 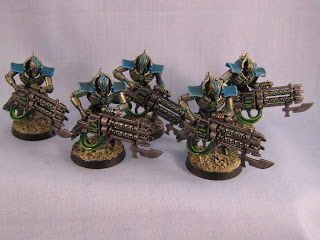 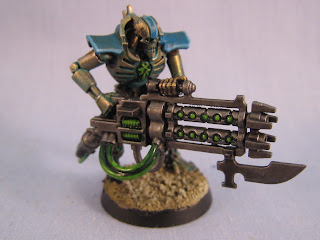 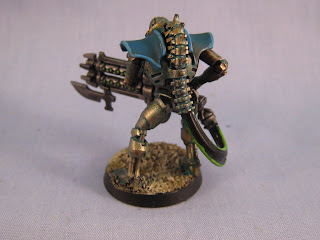 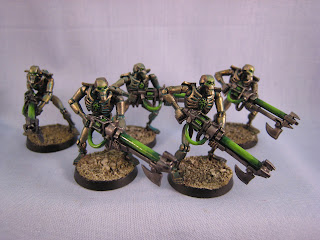 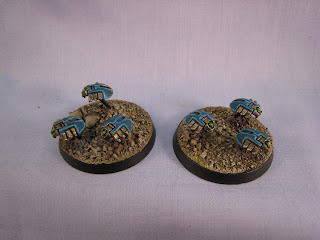 The bases need some static grass to break up the sand, and I'll use probably harvest gold from woodland scenics.

Last night I finished assembling the annhilation barge for Necrons and 14 hellions for the Dark Eldar.  This weekend I'll look around for different conversion inspiration to do the Baron.

Next on the docket, all the crew for my ravagers and venoms!
Posted by Brian Carlson at 10:31 AM 4 comments:

Email ThisBlogThis!Share to TwitterShare to FacebookShare to Pinterest
Labels: Necron

Now this is what a razorwing flock should look like.  Just a mass of flying nasty things.  I decided to keep the legs off them, more because I was lazy, but I don't think it detracts from the look.  It was a little bit of a pain to clean all of the miniatures and attach the wings, but all in all they turned out great.

Since my army is that silver metal with purple (body suits), red (hair) and green (for poison) accents, I kept to one of those colors.  My beasts will mainly be either shades of purple or red with green tongues. 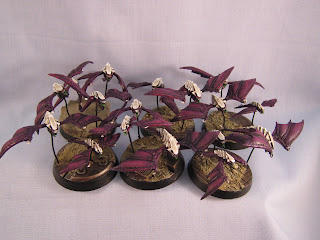 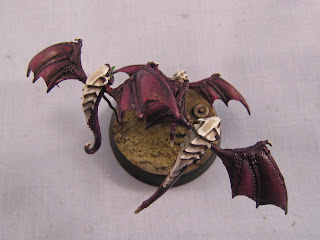 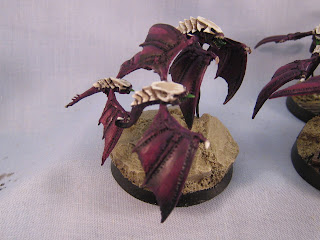 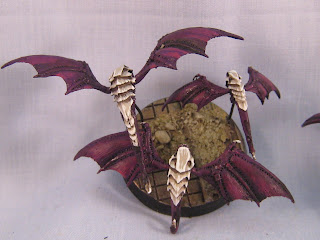 The carapace was simple.
- Dneb Stone base
- Devlan Mud wash
- paint on the Dneb Stone in everything but recesses
- White highlight with some striations on the edges.

Next up on the dark eldar project log is the crew for my two ravaragers and 4 venoms.  I'm also working on the side assembling the extra black templar pieces for that list.  It'll be a debate on what army I end up taking for the Adepticon championships.
Posted by Brian Carlson at 9:25 AM No comments:

I had a great time at this last weekend playing with my Black Templar, and with the FAQ they can at least hang in this edition.  The piece that really surprised me is how much of a shooting list they can be if put together the right way.  It's inspired me to add to the list and play it some until the next version of 40k or a new codex chumps them. 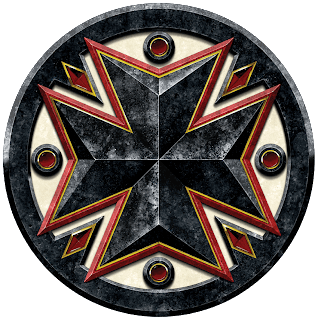 While reading the list, I could  use your thoughts on which vow to take.  My initial thought is that since the list is more geared to shooting, the extra psychic defense of "abhor the witch" with a 5+ save against psychic attacks directed at me would be the way to go.  The more I think about it though, I think it would help to have the preferred enemy vow.  That would help me actually do well in combat if forced.

I need to take the High Marshall to help with leadership 10 across the board, and he's in a rhino to keep the effect.  Having to take a leadership test to not shoot at the closest unit is rough and I need every point of LD possible.  Plus it sucks to only lose one guy and fail a leadership test and run off the board.  This happened to me twice over the weekend since my troops are only LD 8 since they can't take a sergeant.

That's a lot of long range firepower.  That's effectively against tanks 14 strength 9 shots, 6 strength 8 shots, a couple of meltaguns and a lot of tank hunting storm bolters. I'm a little light on troops, but they can play conservatively.  Not the best in combat, but they can hold up against most with the exception of deathstars. The nice thing about all of the missiles is against hordes I can switch to frag missiles.  A very mobile long range shooty army.

I'll need to paint up the rhino, 10 more assault terminators and 3 Typhoons.  I started assembling them last night.

Additionally, I'll make a cool new cathedral display base.  This time I think I'm going to do some sort of old church / graveyard using some of the lord of the rings scenery which is awesome combined with the new garden of morr.
Posted by Brian Carlson at 10:43 AM No comments:

Ah, how tedious painting black is... every mistake of highlighting is magnified tenfold.  I just finished up the 5 terminators in the nick of time.  I'm now off to the 1,750 tournament, should be the last time I use power armor in awhile.  It'll be all Dark Eldar and Necrons moving forward.  Here's the finished product. 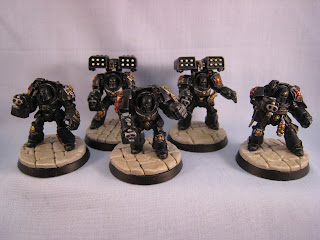 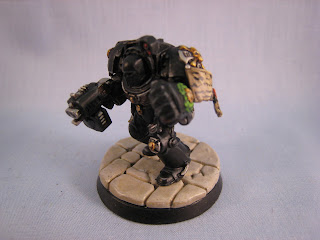 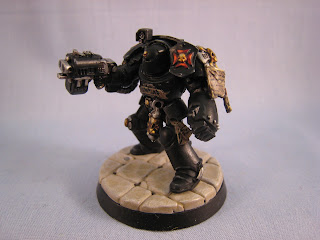 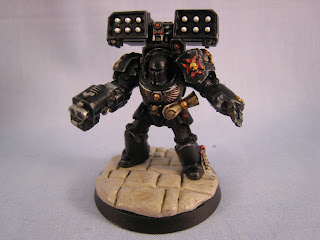 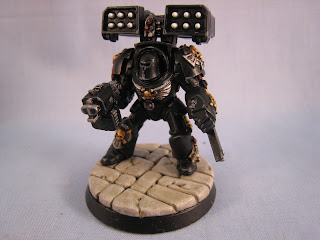 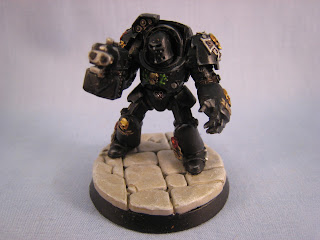 My next project that is just started are another batch of Necrons and the flying rippers that will be used as razorwing flocks.  I think the rippers really capture the feel of the flock way better then the metal birds. 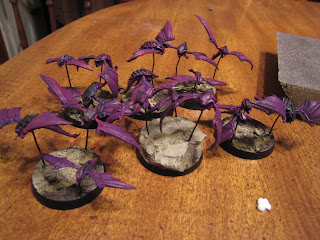 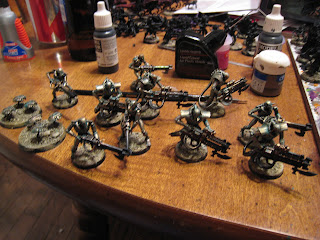 I also had the chance to base about 2k worth of Dark Eldar.  Assembly line here we come!  I'm off to the Chicago Battle Bunker.  I can't wait to get some structured games in, I really miss playing.
Posted by Brian Carlson at 8:47 AM No comments:

Adding to Black Templar for the weekend tourny

This Saturday we have a 1,750 tournament at our local GW store, one of our monthly series.  It brings a competitive group of guys and our best rule is that models have to be fully painted.  Which means that my Dark Eldar are not quite ready yet for prime time.  There has been an influx of Grey Knights players (as everywhere else in the country) so many of my armies just can't hang with the nasty Paladins.  They rule out my Blood Angel Sanguinary Guard.  I just don't feel inspired to play one of my many other armies...

So late Wednesday night I though of a fun list that would be flexible and challenging.  All infantry Black Templar.  When I tried them last I didn't have enough down range anti tank.  A little gem in the army list is the ability to take two cyclone missile launchers in a 5 man terminator squad and give the squad tank hunter.  I already had 5 of them ready to go, so it just means painting them up and I can get them on the field tomorrow. 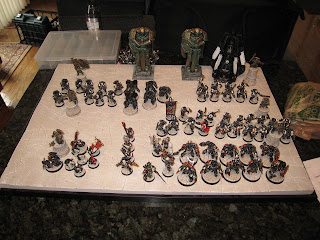 Tonight will be spent staying away from Modern Warfare 3 (yes I'm a sucker for that series) and painting up some Black Templar.  It's funny to see how much you improve over the years.  I'm looking at how I painted this army (5 years ago) and how I'd do it different.  Unfortunately I need to keep to the same style to keep the army looking similar. Here's my close assault terminators, and the 5 regular ones I need to paint. 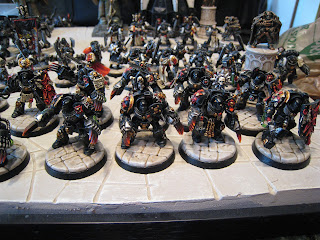 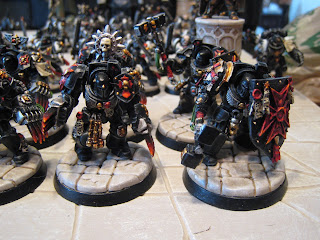 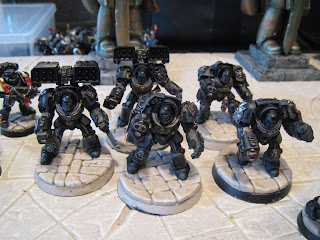 Here's the list I'm thinking of running.  I can't find my damn codex but luckily I still have army builder on my computer.

Nice thing is it only gives up 10 kill points in a 1,750 list.  Two nasty close combat blocks that can run in the movement phase and the chaplain with cenobite servitors really pushes the unit forward if they get shot.  I only have 6 Effective strength 9 shots and 1 meltagun, but we'll see how the list hangs.
Posted by Brian Carlson at 11:48 AM No comments:

I'm such a sucker for new projects... I just had to try my hand at a Necron.  Like I did with my imperial guard project, I went with a super fast paint scheme. I'm really happy with the outcome.  I went with a patina color on the armor and a simple color scheme on the gun. 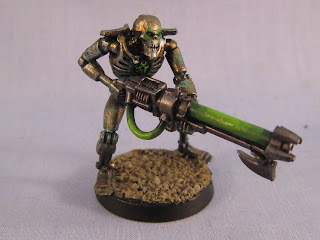 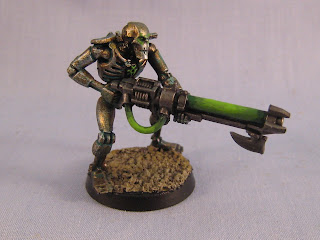 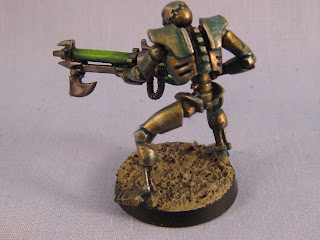 The new miniatures are just way too tempting!  Must get back to Dark Eldar!
Posted by Brian Carlson at 4:20 PM 6 comments: