I'm anxious awaiting for my Secret Weapon Miniatures Kickstarter to come in, but I couldn't wait too long.  Figured I'd whip up some easy tiles for 2 4'x4' tables.  My Dad is a genius at woodworking and I spent an evening with him last week doing tons of cuts.  The thought is on these tiles that I'd be able to customize and make cool little vignettes on the "blank" ones and have some standard roads to make as big of a city as need be.

Here's my example straight road tiles.  The roads are 5" wide which seems to be about right for two of the Antenocitis Workshop cars to drive side by side.  The "blank" tiles will be raised by one level so they're flush with the sides of the road.  I'll go and pick up some textured paint to lay down, it should go pretty easy. 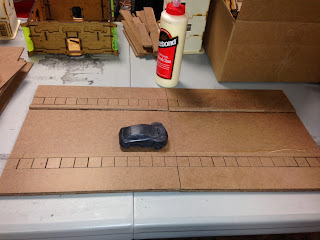 Hopefully this will give me some quick and effective city tiles.  I'm really looking forward to doing some fountains, parks, etc.

Since I'm torn between doing a futuristic city and a more modern one, I'm going to do two themed tables... one of each!   The more futuristic buildings will come from MicroArt Studios, Sarissa Precision, CNC Workshop and Warmill and my more modern day buildings are coming from Demo's Laser Cut Design as well as Sarissa Precision.  Here's the links to the sites if you're interested in their stuff!

I'll do some reviews on the buildings over the next couple of weeks.
Posted by Brian Carlson at 10:48 AM 3 comments: