Got my first 20 spearmen done... 30 to go!  Hopefully this big block of 50 will pay off!  Still a little work to do on the standard bearer, but overall I'm happy with the quality.  This is definitely a speed painting army.  The banner decal I purchased off an old site "Imperial Forge".  Nice decals and will help speed up things.  Unfortunately it looks like they're no longer in business. 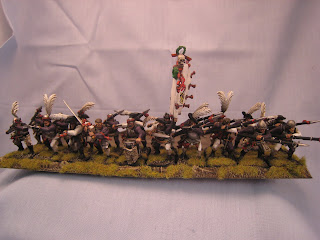 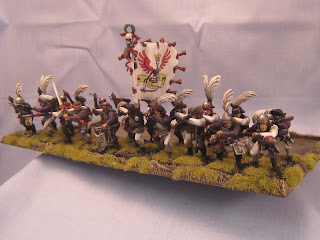 I'd like to use some of the old empire set for the second through 5th ranks.  I love the spears at attention to flush out the back ranks.  I picked up some extra empire heads to do some simple head swaps.  The question is will these old plastics mix in with the current state troops? 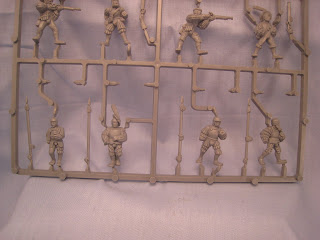 Finally I figured I could use some knights with great weapons.  Now that they're back to being +2 and with empire already having low/average initiative, the extra strength after the charge may come in handy.  Not a big fan of the knights of the white wolf though.  I figured the new plastic greatswords would be a great kitbash.  After piecing this together, I think it could use a slightly longer torso.  The greatsword torso sits a little shorter due to the legs adding a portion of the torso.  Thoughts on if this will work or if I'll need to add some plastic card? 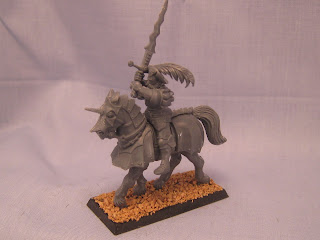 Just started churning out my old metal greatswords.  Should have the unit finished this week!

Damn... hobby ADD strikes again.  I've been bitten by the Warhammer bug.  It's been 8 years since I've dabbled with Fantasy, and I think I'll give it another shot.  The challenege is painting en masse - I'm used to the individual nature of 40k painting.

Here's my stab at the empire.  I wanted to keep a dirty feel - not too bright on the colors.  I saw a long time ago the city of Boghaffen; purple and dirty white.  Either that or Ostermark (purple and white?)

Using mainly foundation paints - foundation purple and dhneb stone were the base colors.  Quick highlight of white (on dhneb stone) and mixed in a little light purple then washed a black wash on the purple and devlan mud on the white.  Chainmail on the metal parts with a little burnished gold trim, and foundation red for accents.  Hit them both with a black wash.  Picked up the red with some blood red accents.  Flesh was simple.  Foundation Tallarn flesh with bleached bone highlights then washed with ogryn flesh wash.  Finally trimed off the black and did a little calthan brown on some hair.  Parchment & Skulls were bleached bone, white highlight and mud washed.

Simply done!  The purple photographed really dark - but that is the look I'm going with.  Thoughts? 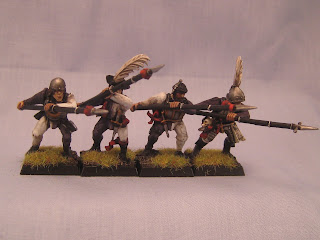