By the Power of Greyskull!

I've been doing too many assembly line armies, and I think it's time to reward myself with something fun.  When I saw this space wolf head months ago, it screamed "He-Man". 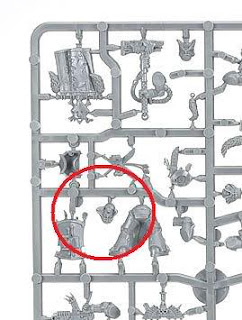 Then I took a look at the white lion from the High elf chariot and thought it would make a good battle-cat.  Combined with some chaos marauder horsemen parts and a whole lot of greenstuff... I think I can make a fenrisian mounted wolf lord with a "frost sword" and storm sheild modeled up like he-man.  Yes it's so out of warhammer context, but I think it'll be a fun project. 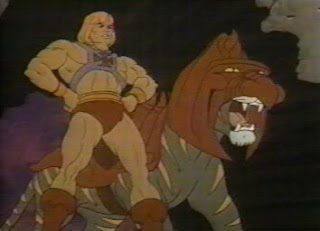 By the power of Greyskull!

If you have any ideas on how to make this conversion work, let me know.

I just started working on my Space Wolves vehicles and here is a rhino chassis that's almost done. I don't want to do any chipping or weathering of the main part of the model (although I'll do some exhaust markings), but I could use some help "mudding" up the bottom.

Ideas on how to apply some dirt / mud without overdoing it? Stippling the best route?

This is my speed painting army, so I don't want to go over the top for timing. 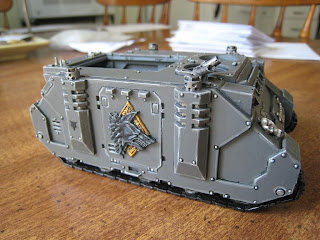 Well, in typical fashion I have way too many project ideas.  After painting on the Imperial Suns, I need a fix of doing some "easy" fast paint armies.  I think I've settled on Space Wolves.  My goal is to get an 1850 list done before the wedding coming up mid May.  Riiiiight.... I think I can make it happen though.

The other armies on the docket are:
- Big Mek dread bash list (lots of killa cans, dreads, etc.)
- Nicely painted  Death Korps of Krieg army
- Blood Angels for the Team tournament next year
- A fantasy army of some sort - either Empire, Brettonians or Chaos Warriors

I discovered and am loving the grey primer by Army Painter.  This is going to be my saving grace when it comes to the fast Space Wolves army.

Sorry for the crappy pictures, I tore down my photo booth... will be back up in a bit.  Ouch, and after look at them, a little out of focus.  At least some pictures are better than none.

I've started by priming grey (which is more difficult then it sounds due to the fact it's only a shade darker then plastic), then painting on chainmail for the metal parts, and burnished gold for trim.  Also any dark brown things I hit up first too.  Followed by a generous coat of the badab black wash... presto!  I have the first stage of the model done.  Here's a shot of the model after it's initial wash. 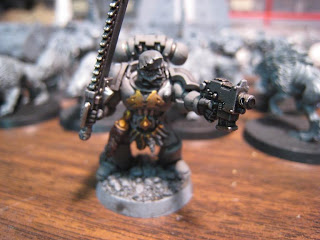 After that I'm using the Reaper Masterclass Stone Grey triads to get a darker greenish grey look.  My goal with this army is similar to my desert guard force... NO MIXING.  That's right folks, I'm going to try and do everything straight out of the jar.

Here's a model with most of the painting done.  I haven't finished the browns or touched up the face.  I'm doing my basing last so I can dirty up the bottoms of the legs.  After this, I'll put on a coat of snow. 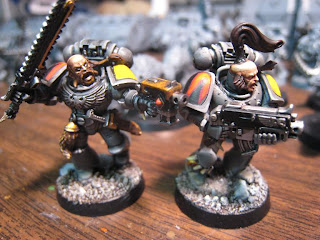 I've also picked up some thunderwolves from Mr. Dandy at http://www.mrdandy.com/wargamma/  Great sculpts that went together relatively easily with little greenstuff needed.  Here's the primed models ready to go. 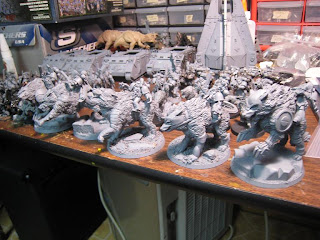 Here's the list so far.  Next up on the conversion docket is the fenresian wolves.  Nobody seems to be taking them, but I'm going to try and make them work! 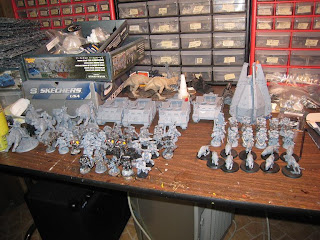